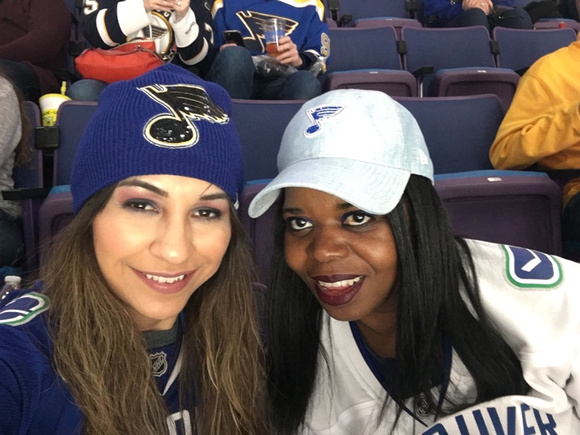 Just a short recap of my first hockey roadie.

On March 22, 2018 I woke up to a screaming alarm clock. I knew if I didn't make the first flight it would sent the entire tour back. It was 3:30 AM and I still had a few last minute items to pack. The bulk of the items were packed, but there were a few just in case items I needed to add. I somehow managed to get into the shower, I hoped it would help wake me up, I didn't drink coffee because I figured I could sleep on the plane easier without the caffeine high. 4:20AM I finally made my way to the airport parking. My flight was on time and scheduled to leave at 6:20AM. I very nervously got into the shuttle not knowing what the line would be like, or if there would be more traffic to face as we approached the airport. The shuttle driver stopped and got out to help everyone with their bags. I remember feeling a sense of relief and calmness as I smiled and walked happily pass the luggage check in with my back pack and tote bag. The line was very long but was moving swiftly due to the low TSA security check.

At 5:05AM I made it inside the terminal. "The hard parts over." I thought. I reached into my back pack and switched out my coat for my New York Rangers blanket, grateful I brought it along, even if it did take up way too much space. I think when you are away from home sometimes you need something to make you feel at ease, for me it was the blanket and my two moose friends. 5:50AM we started to board the plane. There was a young woman sleeping on the floor using her luggage as a pillow, I remember thinking, "That will be me in Chicago in an hour or so.". I slid into the first aisle seat I could find. Unfortunately this was right next to the wing which made for a very noisy flight. I just sighed and placed my blanket over me. I would soon be in Chicago and see my favorite game.

We landed about 8:20AM and I still needed a nap. Vanessa wasn't due in for a while, Alma was still at work, and we couldn't check into our AirBnB until 3:00PM. So I decided to scope out a good place to sleep. I found a very quiet area at the very end of the terminal and set up sleep camp. About an hour later I was awoken by screaming laughing children. Why they picked me to bother when they had the entire area to theirselves is beyond me. I have slept through screaming babies so I tried to make the best of it and get some sleep, I had a very long night ahead of me. Finally at about 12:30PM I woke up and decided it was time for pizza. Alma, my old friend from San Francisco, text me to let me know her boss let her off early, and I later got a text from my AirBnB saying my room was ready. "This is perfect!", I thought I would have plenty of time to get to the AirBnB shower and still be early to meet Alma for Chicago style deep dish pizza. This simple task would soon prove to be not quite so simple as I thought.

I took the long walk to the train station, it's in the airport but I feel like I walked a mile to get there. I got on the train and got off at the stop the man at the airport advised me to. I then pulled out my cell phone to route me to the AirBnB, a 10 minute walk, easy. Not easy in a city like Chicago however. Not only did I get lost but my phone died in the middle of my journey and I had no way of charging it. Note to self always, always, always, bring your remote charger on these road trips. ALWAYS! As I was sweating walking through the city of Chicago not having a clue where I was going, I remember thinking, "What on earth did I do before the days of GPS?", I also thought, "The blanket you remember but the remote puck charger you forget! Dumbass!" FINALLY a glimmer of hope I spotted a mailman if anyone knows where this street is it's a mailman. I stopped him while he was exiting a house and he said the street was so small if I were to blink I'd miss it. This was a small jester but it did help me to remember not all people are bad. Even when you are walking around Chicago in a Luongo hoodie.

I finally made it to the AirBnB and rang the bell as I still had no cell phone. I was greeted by my host, a tall dark-haired man with an accent. I explained to him my journey and he didn't seem to care one way or another. He opened the door and gave me the key. A very small studio but perfect for two broke girls on a roadie. He told me to message him if we needed anything. I charged my phone and immediately called Alma. I was sure she was worried. Shew was relieved to hear I was alright and informed me she had been drinking and to take my time. I showered and let my phone charge. I got out of the shower and sent Vanessa a text to let her know I was safe and there was only one key to the AirBnB, and that I would leave the door unlocked. She showed us as I was doing my makeup. I was so happy to see her, so happy about the journey that awaited us, and so very happy for the personal journey that awaited me. I hugged my best friend and headed out the door to see my old friend.

I greeted Alma with a smile and a very long hug. We chatted and had great Chicago style pizza. She mentioned she had never been to a Blackhawks game before and asked it Vanessa would mind if she tagged along. I respectfully asked Vanessa's opinion about the situation and she was find with it. Good thing the two of them got along well. I wasn't surprised by this at all. 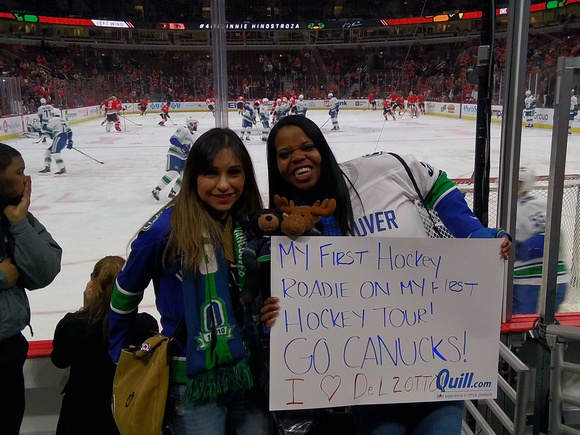 We took an Uber to the game and printed our tickets. I'll post a more detailed post about the arena in a later blog. We had drinks and watched the Canucks kill the Blackhawks in one of the best games I've seen them play all year. Del Zotto even scored!!!! So much fun.

After we went for drinks at a sports bar and then back to the AirBnB for a rest before the drive to St. Louis.

I awoke fairly early to Vanessa sleeping. I showered and went for coffee. I got Vanessa a drip and a yogurt, and myself and iced house coffee. I walked back to greet her and check out. 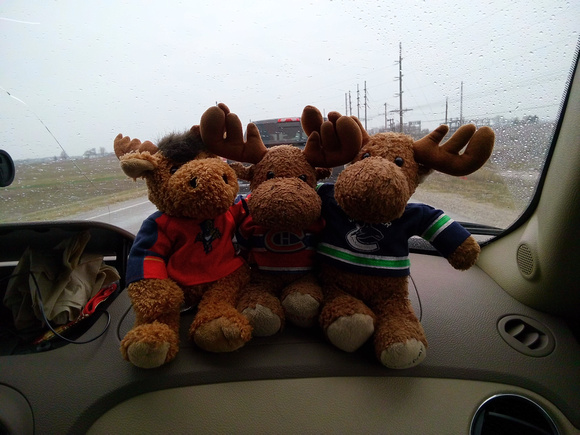 On we went to St. Louis. The road trip was a short five hour drive. Vanessa and I chatted and listened to music, while I knit. We arrived in St. Louis around 4:00PM about three hours before puck drop. What a pretty town. Very old English looking, if that's a thing. We checked into our very beautiful hotel. I was so hungry and Vanessa really wanted to shower. I couldn't find a microwave and Vanessa couldn't get ready fast enough, first world problems! 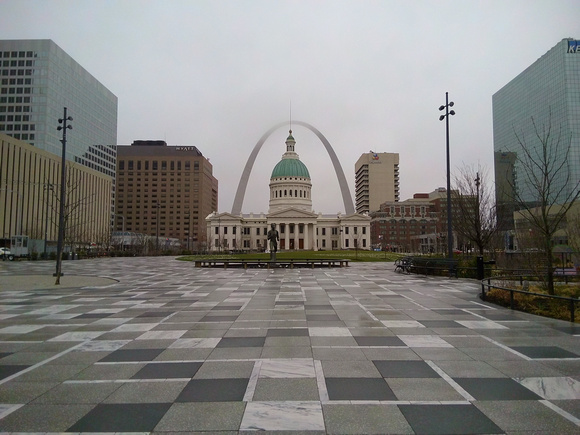 We Ubered to the game, BIG MISTAKE! We were next door! LOL life lesson learned. The game and the fans weren't that great, I'll touch more on this later in a future blog, but the Canucks lost and we got rained on, but we were still smiling at the end because Vanessa got on the jumbotron for her last game and I got to see one of my favorite NHL teams play live. 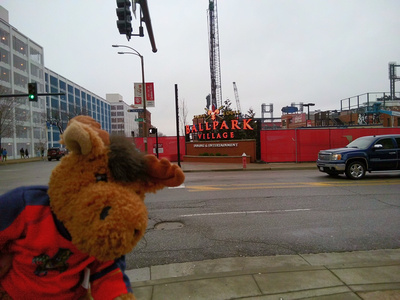 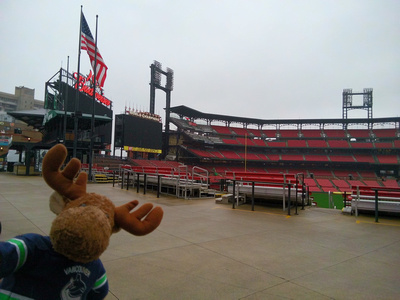 The next morning we checked out and had lunch at the ballpark. Then we went to Knitorious in St. Louis to hunt for yarn. 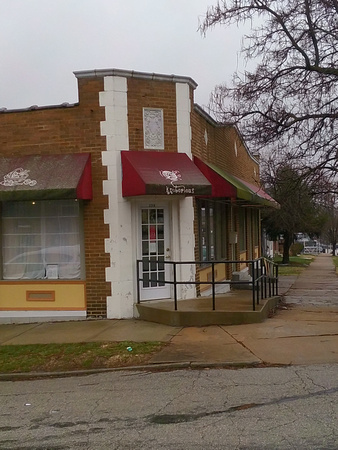 Vanessa and I also went to the Casino before she dropped me off to the airport. It was quite different.

I took my friend Austin to the game. Del Zotto gave me a puck, and WE WON!!!! It was great. The boys kept banging into me for warm-ups and showing me lots of love. Del Zotto was all sneaky and signed a puck for me, what a sweetheart!!! I'll get into this more later in my Dallas post.

Anyway that's pretty much it. I've been working like crazy so I'm sorry this post it so late. Stay tuned for my arena reviews and subscribe to know know when I post. And of course feel free to comment on what you think, good or bad I just want to know who's reading.