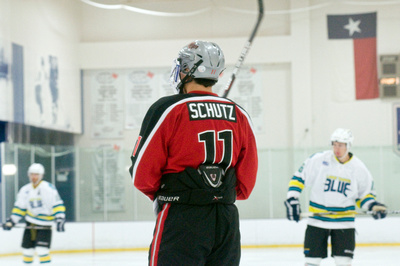 Chris Schutz is excited to be joining the Dallas Ice Jets Junior A team for the upcoming 2013-2014 season.

"I just want to get as many wins as possible for my new team." Schutz says. "I'm excited, and determined to score goals."

The 18-year-old joins Coach Paul Taylor's junior team from the Ice Jets U18 Midget team. Schutz, a Fort Worth, Texas, native, started playing roller hockey when he was six years old. At age eight he moved inside and made the switch to ice hockey. Schutz credits his brother for being the reason he began playing.

"My brother got me into it. I started playing roller hockey with him and it was really fun." says Schutz. "I played all sports growing up;
baseball, soccer, I even played a little golf from time to time, mostly for fun. Hockey was my favorite out of all of them."

It was the goal-scoring that made Schutz decide to play forward.

"I love the excitement of scoring goals. It gets me pumped for the game."

Schutz first started playing for the Ice Jets at age 13. At age 15 he decided to explore other programs, but returned when he discovered
his skills weren't being developed as much as he would have liked.
"We had a really good team and I liked Paul. I could see I became that much better from all the practice time last year. I needed more
development to be a better player and I knew the Ice Jets could help me with that."

Schutz describes playing hockey as his healthy outlet from all of life's problems and temptations.

"It's one of those things where all my problems I have, or anything I'm dealing with just goes away once I start playing," he says.

"Hockey builds good character. A lot of kids out there are doing bad things like drugs and alcohol, and I'm always at the rink doing what I love.  I think it helps keep kids stay out of trouble."

Schutz played center last year, but has switched to the right wing for the upcoming season.  Last season Schutz played in 32 games and picked up 10 goals and 19 assists.  He hopes to improve on everything this season and became a more well-rounded player.

"Mostly I've been looking over set plays that we should be working on in the season that I want to better understand."

Head Coach Taylor made the decision to move Schutz to the junior team this season in an effort to take his game to the next level. Taylor says he wants him to play against a bigger and stronger team this year. Schutz enjoys his head coach's ability to push him both on and off the ice.

"He pushes you to be the best you can be on and off the ice. He tries to build good character, which I really like." he says. "When I'm
playing for Paul I always like to work hard because I always get rewarded in the end. He pushes you and it makes you that much better. I love that about him."

"We have five practices every week and we go from 2 p.m. to 7 p.m. every day. I really like that part of the program. The development side is key to success in hockey and you need to build your skills and hard work because it pays off in the end."

Schutz hopes all the hard work and development will pay off for him at the end of this season, as he has his sights set on playing a higher level next season.

"I plan to play on a higher level junior team after this year." says Schutz. "NAHL, BCHL, or USHL would be nice."

Schutz, currently a high school senior, hopes to go to college and play Division I hockey after juniors.

"I want to play Division I hockey. That's my main goal, to play college hockey."

Schutz says the most exciting part about playing at the Polar Ice House is the fans.

"It's great to have fans when you're at your home rink when you score goals. I love when the crowd is cheering for you, it's the best."

Even though he grew up in Dallas, Schutz is an avid Blues fan thanks to his favorite player, forward T.J. Oshie.

"I'll always like the Stars but I really like the Blues ever since Oshie came in. I've been following the team ever since." he says. "He
played college hockey and then went to the NHL. He's a player I really look up to: he's got good character, works hard, and it pays off for him."

Schutz says his favorite Ice Jets memory is from last year, while he was playing on the U18 team. He says it sticks out most because the team was on such a great hot streak.

"My team last year went on a 9-and-0 run. We did average about halfway through the season then we won nine straight.  And we won two tournaments, which was nice."

He also enjoyed all the great times he spent with his teammates both on and off the ice.

"We became a lot closer at the end, and we all just came together as a team. Last year was the most enjoyable season I've ever had. It
was a great group of guys and we worked hard together to win every game."

Schutz hopes to have even more success with his new team, as they continue their journey on and off the ice and work on creating even more fun, and long lasting memories.

Njeri Sims is a video editor, writer, and fashion designer living in Dallas.