I can't help but laugh at the mere thought of this question! The truth is photographing hockey is really no harder than playing hockey. If you have never played hockey the following quote will give you an idea of how challenging the sport is to play:

Is hockey hard? "I don't know, you tell me. We need to have the strength and power of a football player, the stamina of a marathon runner, and the concentration of a brain surgeon. But we need to put all this together while moving at high speeds on a cold and slippery surface while 5 other guys use clubs to try and kill us, oh yeah did I mention that this whole time we're standing on blades 1/8 of an inch thick? Is ice hockey hard? I don't know, you tell me. Next question."
-Brendan Shanahan

So to answer the question YES! Hockey is the hardest sport to shoot! You have some of the worst lighting conditions in any sport, some of the fastest moving players in any sport, if you are lucky you will see the puck in time to duck, and did I mention you can't use your flash without running the risk of blinding a player.  Plus, when you are not moving around your hands and body will go numb from the cool temperature, as most rinks are kept very cold. Oh yeah and just about every time you try to shoot on the ice you slip trying to get the angle you want.

When I tell people I shoot sports I get a response like, “How cool! You get the watch games for free.” I wish I had the luxury of just watching the game. I have to shoot the guy with the puck, the guys without the puck, and the guy who is receiving the puck. And through all of this I have to make sure the shot is in focus, properly composed, and properly exposed.

To say shooting hockey is hard is an understatement! Most games I am lucky if I end up with five good shots.

But all the sports photographers I have met in my lifetime say hockey is their favorite sport to shoot. I must agree. I think it is the overall challenge that makes it so loveable. 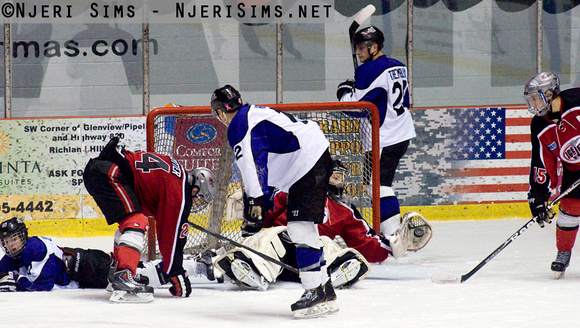 Goaltender John Groth, of the Dallas Ice Jets, makes a glove save against the Texas Brahmas. A one-in-a-million shot that took me all season.