The Dallas Ice Jets gear up this weekend with an exciting series against the cross-town Dallas Snipers.
The Ice Jets begin their series against the Dallas Snipers Friday. The two teams met previously this season and the Ice Jet came out hard on November 1, 2013 defeating their local rival with a score of 5-2. The Snipers didn't give up the next day and were able to force the Ice Jets into overtime where the Ice Jets finally pulled off a win on a Johnny Henson goal. The Ice Jets hope to keep their streak against the Snipers going over the next two days, after postponing last weekend's tilts.
Due to a freak ice storm in the Lone Star State two home games for the Ice Jets vs. Snipers were canceled. Ice Jets head coach Paul Taylor has taken full advantage of the delay.
"With a couple weeks off in between games we have been working hard to fine tune some areas of our team play," says Taylor. "I look forward to seeing how we play this weekend and if we instill the practice habits we have been working on into game situations."
The players are also positive the delay will only help them going into the series. Defensemen and Alternate Captain Bryan Siersma expresses the positive vibe in the locker room.
"The team feels good," says Siersma. "We've had a couple days of practice this week and cancelation of last week helped everyone rest up and get their injuries taken care of."
Siersma is referring to the undisclosed body injuries suffered by forwards Ryan Cutter and Ondrej Valo in the Ice Jets' previous series against the Boulder Bison.
"I'm feeling better." Cutter says. "I am hoping to get a release from my doctor to play."
Cutter has five points so far this season and is ready to get back on the ice for his team. It is still unknown if he will play in this series. Valo however, with 20 points so far this season, will play. Valo says it's important not to underestimate the Snipers.
"Last series was tough," says Valo. "But we won. That will help to motivate us to beat them again. I feel 100% ready. Saturday's home game is going to be very special for us. I'm really excited!"
It's a home-and-home weekend for the two teams. The Ice Jets play the Snipers at the, Dr  Pepper StarCenter arena in Plano, Texas, tonight at 7PM CST, and Saturday at 6PM CST to close out the short series at the Polar Ice House with a very special game. The game will not only be a delayed "Pink In the Rink" game but it will also feature the famous Teddy Bear Toss. Pink In the Rink is a Strikes Against Cancer benefit, and the Teddy Bear Toss will benefit Toys For Tots. Goaltender Tyler Hough could not be more energized to likely get the start in net for Saturday's game.
"Saturday night is going to be a blast! The Snipers played us tough last series and rivalries bring out the best of both teams," say Hough. "We are supporting two really great causes. I'm looking forward to a competitive series."
With nine starts in 14 games this season Hough is has recorded six wins and has a save percentage of .931%.
The Dallas Snipers enter into this series after several difficult losses. However, with two well rested rival teams this is still anyone's game as Ice Jets Captain Yannick Aubé points out.
"It will be a good series for us," says Aubé. "The Snipers really want to beat us so I think we will see some good hockey this weekend."
No matter the outcome of the series it is clear the Ice Jets are going in tonight fully motivated and ready to gain momentum.
"We're looking forward to getting the weekend underway and making our way to Vegas [for the Western States Shootout] on Monday," says Siersma. "Wrapping up this first half on a winning note and going into the break with some good morale and confidence."
To learn more about Strikes Against Cancer go to http://www.strikesagainstcancer.org/
For more information about Toys For Tots go to http://www.toysfortots.org/
Njeri Sims is a video editor, writer, and photographer living in Dallas. 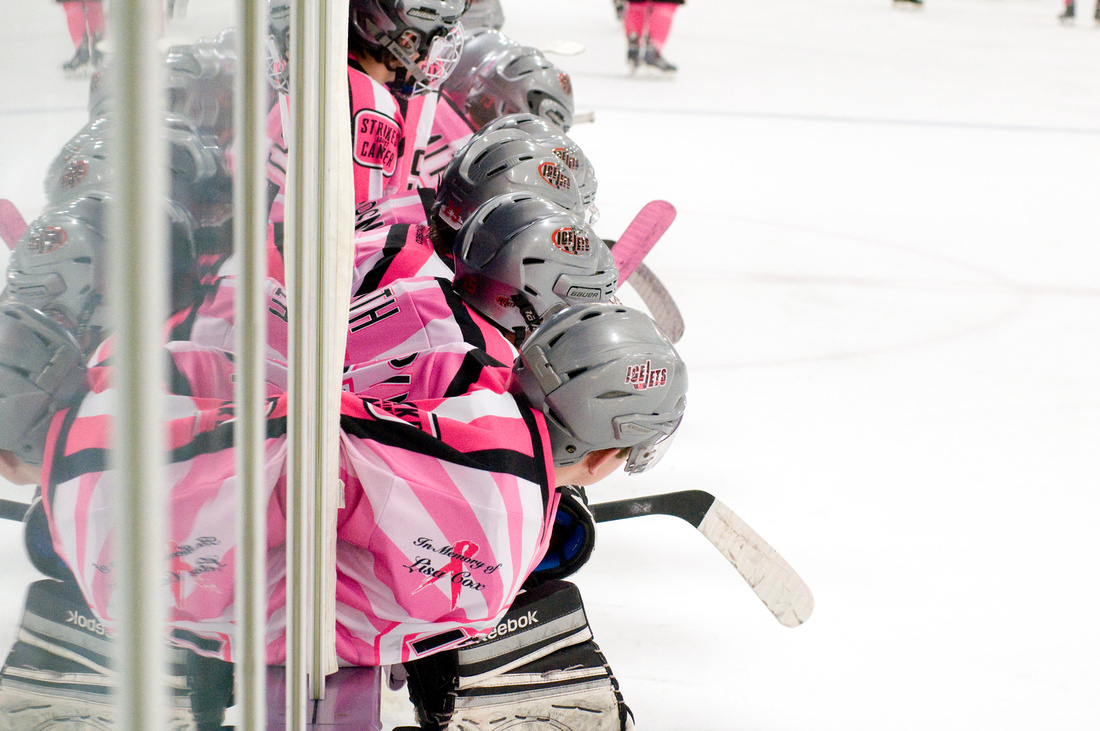