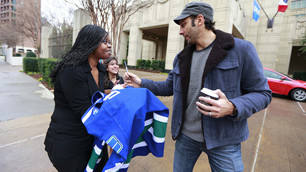 I have always shared a tremendous love for the arts. As a child, growing up in New York, I would admirer my grandmother's paintings and knitting. As I grew up my love for art also grew.

During high school I explored the possibility of acting. Later I became involved in technical theater, building stage sets, painting, assisting with sounds, and designing programs.
When it came time to choose a college where else was I to go other than San Francisco, argued to be one of the most artist cities in the United States. In San Francisco I attended the prestigious Academy Of Art University. There I learned many things, but the three most important were: Anyone can be taught to draw, Video editing is so much more than just a skill it is a creative art and ALL editors should be respected, Photography is a wonderful form of self expression.

After earning a Bachelors of Fine Arts I attempted to start my career in San Francisco. After about three years of going from one freelance editing job to another, temptation finally got the better of me and I decided the best thing would be to move to Los Angeles. I spent over a year in Los Angeles networking and molding my career but decided to take a hiatus from the film and advertising industry to explore my true passion for sports photography and writing.

I have always been a big sports nut, mostly baseball and hockey. I would love to one day work in hockey as a writer, photographer, or video editor full-time.