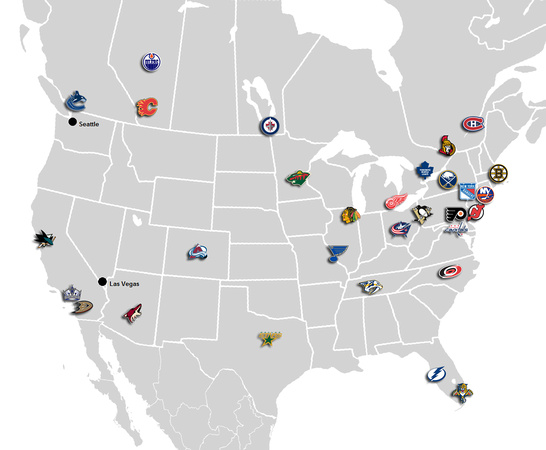 2018 will mark the completion of my best friend, Vannessa's, hockey tour. I have always been envious of her, being able to travel to different hockey arenas. It took some time, but great for her she did it! Since I go to a hockey arena each year, mostly for her, I decided the end of her tour would be the beginning of mine, it is after all, on my "Life List".

The start date will be March 22, 2018, we are going to the Blackhawks vs. Canucks in Chicago, or Shitcago as I like to call it. United Center! I hope my first game on this very long tour will be a great one! The Canucks have been playing great hockey against the Blackhawks this season, and for any Canucks' fan that's just good to see. Strong in D, strong on the PK, it feels more, and more like a team every game. I just want these boys to get it together and win a cup.

While knitting one night and looking up Shitcago hotels, I was texting Vannessa on one of my knitting breaks just to give my hands a rest. During this texting relay (Vanessa and I have tons of these as she gets very lonely on the road from time to time.), I came up with an epic idea. At the time I just tossed it out to Vannessa to see how she felt about it. The idea was to add St. Louis to our trip. I have always wanted to do a hockey roadie, like the cool kids in Vancouver, and there was no time like the present. So I pitched the idea to her and she said she would try her hardest to meet me in St. Louis, the last stops on her hockey tour.

There is not another person in the world I would want to spend this tour with other than Vanessa. We met on the Canucks facebook, we stalked the Canucks together, we laughed at the funny warm up moments, we cheered during the great times, and cried during the not so great times. Once I even threatened to beat some crazy Dallas Stars' bitch up for her. Friends like that are hard to find, so for her friendship and loyalty I am very grateful.

I even got a new camera to document the adventure, Polaroid Snap Touch Instant Print Digital Camera With LCD Display with Zink Zero Ink Printing Technology, most rinks won't let me take in my SLR, one reason I love Dallas, they rarely care what I bring in.

Looks like I'm starting my hockey tour off with a bang! Three games in four days, three cities in four days! Excited doesn't even begin to describe it. I feel like I did the very first time I saw Luongo go down in a butterfly, the way I felt at the age of four when I saw my first hockey game. I feel young and alive again. I feel as if I can take on anything.

So what are the top 10 things I MUST bring on the first leg of my hockey tour?

1.) Canucks away jersey (Has to be the away jersey!) I don't wear this jersey much but a roadie seems like the perfect time to start wearing it.

2.) Luongo Canucks hoodie (Best find Vanessa has ever spotted for me in Texas of all places.) The good thing about it is my jersey slips right over it.

4.) Laptop. I need a way to blog and print tickets. I went back and forth between the ipad and the laptop. There are pros and cons for both but the laptop (today anyway) is wining.

5.) A sharpie. You never know who will be staying in your hotel during a roadie/hockey tour so keep a good sharpie on you at all times. I use a liquid type because it looks great on my jersey but you will have to put it in your TSA 3-1-1 bag.

7.) My knitting. I can get a lot of knitting done on the plane.

9.) My Tom Bihn Travel Cubelet, because most arenas have restrictions on the size bag you can bring in. I don't want any surprises, the game is quite far from our Airbnb. 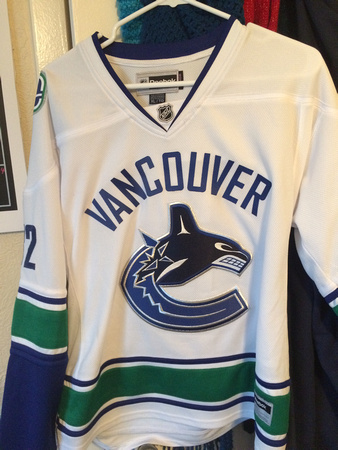 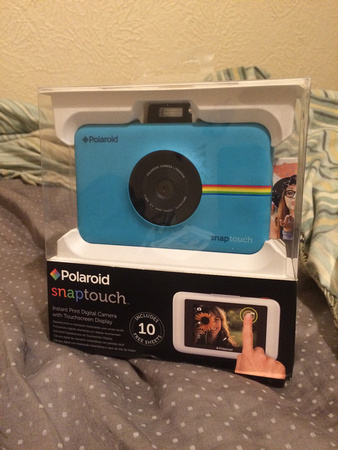 New camera. I LOVE it so far.A must have for me. 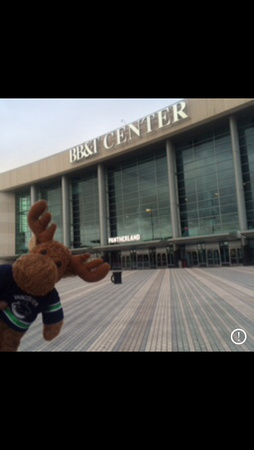 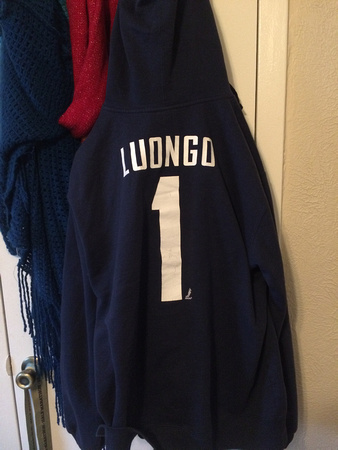